(This post is more or less for me to re-cap for myself...)
On Saturday, Hubby and I came to a stopping point on the front landscaping.  Lack of time and an abundance of rain this fall has really foiled our plans for getting it done the way we envisioned.  Oh, well.  Can't fight nature. 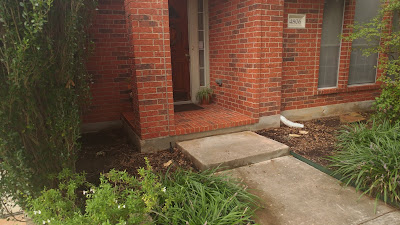 First we removed the old boxwood shrubs that were on either side of the (super dirty) walkway. They were getting very wonky looking and I HATED their boxy weird shape. 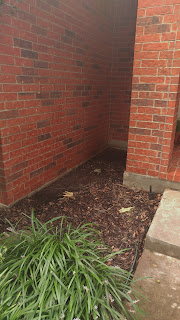 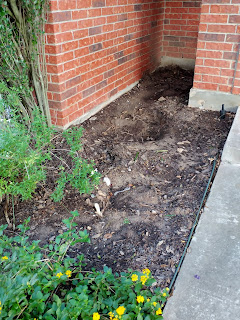 In the above left you can see roots...we had to use a saw to cut those out...then the rain started up and filled the holes with water...the soil here is gloppy with clay mud...so hard to work in.  We had to let it dry out before we could proceed.  And meanwhile, all of that lariope had to go.  It sat in a plastic wading pool for over a week in our front yard.  I'm sure the neighbors loved seeing it. Another set of big roots on the other side, and you can see the lariope that was out of control, choking out the sprinkler pop-ups.  Getting the roots out was brutal!  Maybe the hardest part of the whole project. 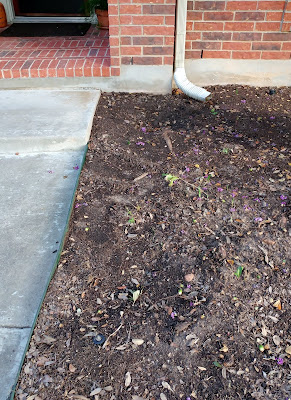 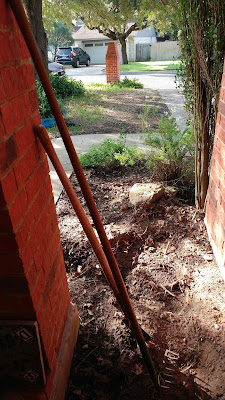 I would work on it whenever I had an hour here and there.  The sun seemed to never shine on the weekends when I had more time.  I felt frustrated with lack of progress. 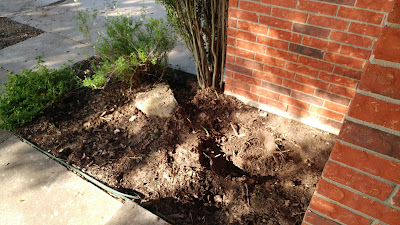 We got to walk past holes and dirt for what seemed like forever. 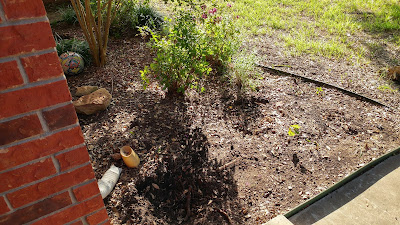 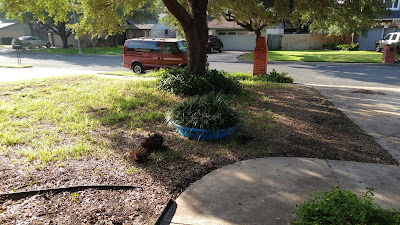 This was midway through the project - moving those lariope to the backyard.  That was actually a good thing as they will help beautify the space along the back of the house. 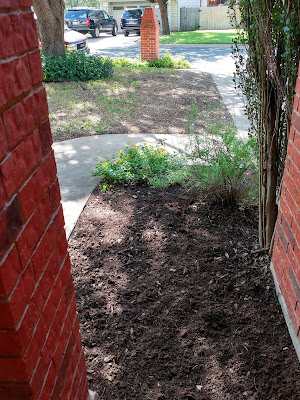 Shortly after that, we had a couple of sunny days to grade the area and plan what to plant. (notice dead lawn in the background above!)  Unfortunately, getting the sprinklers fixed and getting some rain came too little, too late.  ): 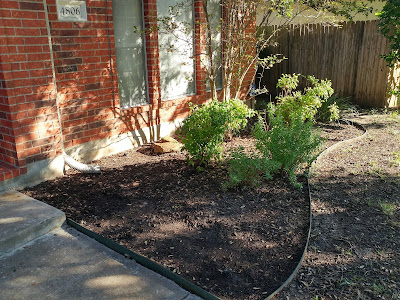 I settled on a couple of cleyera on either side of the walkway (not gonna show a pic of it)  I know, that was not one of my original choices.  But I thought I had chosen a shrub that would do well in either shade or sun with the type of soil we had in this area. 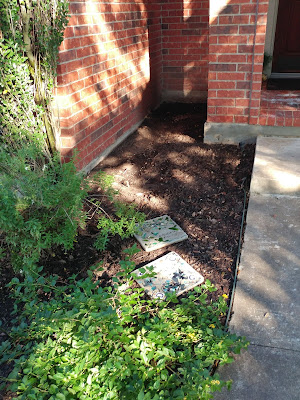 Unfortunately, it was the "bigfoot" variety which was going to get to 15-20 feet tall and way too wide.  UGH.  That will not work here.  So back to the nursery they went. (side note:  the shrubs we went with were cheaper, so we ended up with three instead of two!) 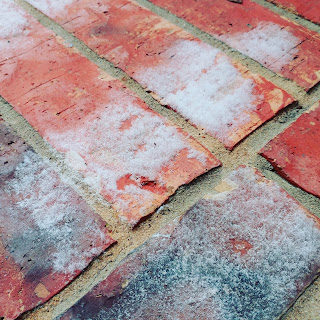 Meanwhile, this nonsense started up.  MOLD.  You could sweep it away and it would be back within the hour.  It was like sci-fi mold.  People were tracking it into the house.  I tried scrubbing it with bleach water to no avail.  Once the sun came out again, it seemed to die off.  Hubby and I finally had a weekend we could work on this together! 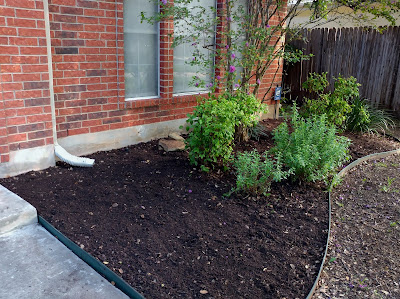 That lantana in the bottom photo was so random.  It had to go!  And we like the look and low upkeep of the deer-resistant salvia - I'll probably buy more of those. 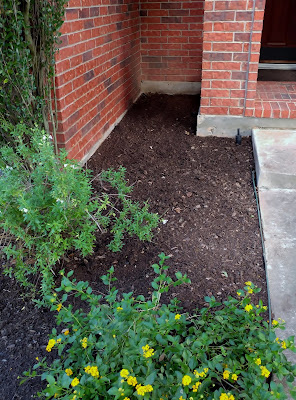 We headed over to the nursery one last time and chose: 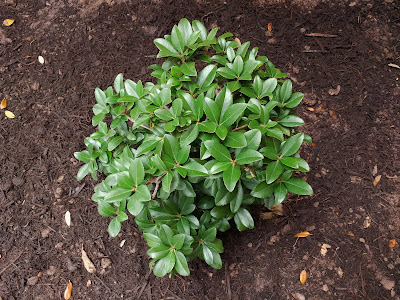 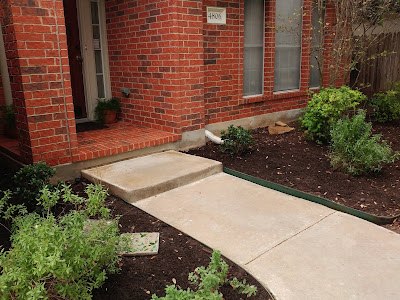 One for either side of the walkway and one for the very end of the long bed.  They get to be about 4 feet by 4 feet, and have a mounding growth habit instead of the square looking boxwood.  Also, they will have white flowers which will look pretty against the brick. 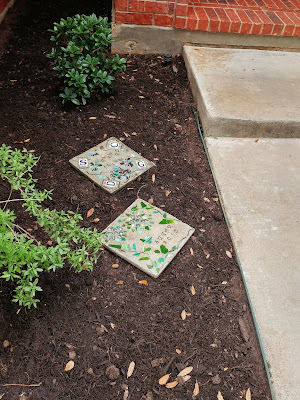 They are small, but will catch up fast, especially since it will probably be a wet fall overall.  We moved some of the salvia around, hoping it will survive being transplanted, mulched just a little, and powerwashed the red bricks and walkway. 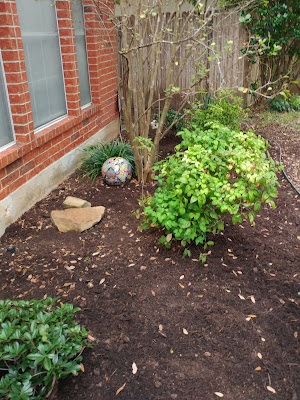 In the spring, I will maybe add some more salvia and some of the tall lariope (Big Blue) that doesn't spread - you can't see it, but there is one at the end of the bed.  And with that, we called it done for now.  I ordered the paint for the front door, so I am looking forward to completing that task.  Then I will put off until spring any other outdoor projects - I'm over it.
Note to self:  Must plan these projects better in the future, allowing for weather, work schedules, and volunteers to help!

I did a lot of landscaping at my previous house. Here, everything is pretty much done for me. I do have a small section to the right of the walkway leading to the front door that needs something. It gets a lot of sun so I was thinking about stelladora lilies, but I love liriope and was wondering about your big blue variety that doesn’t spread. Hmmm. I may have to look into that next spring. Fun post!