We found ourselves in an Empty Nest situation for dinner on Friday night - Bubbie was at a friend's house - so we put dinner in the oven then left the house for Austin Beerworks. 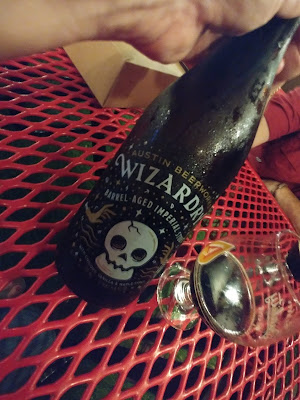 In addition to some tasty Harry Potter-looking beer we enjoyed chicken tacos and a brat on a bun, with some chips and queso on the side.  When we got home, I set the dinner out to cool and stashed it for the next night!  Mischief managed!  The next day we endured a soggy pick-up brunch at a winery with unfriendly tablemates...we picked up our wine and split, intending to enjoy a bottle at Highlands. 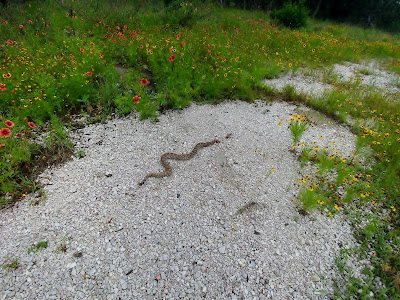 We were there about 5 minutes when I heard Hubby yelling from the front of the barn. 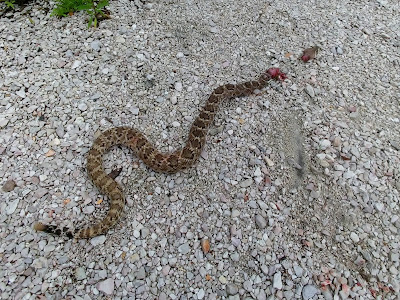 We had left a mouse trap set up inside and I noticed the bait was gone but the trap was unsprung.  Looks like the snake found the mouse...  Unfortunately, we can't have rattlenakes hanging out around the barn looking for mice.  So he was dispatched same as the one before.  But I tell you, its nerve-wracking. 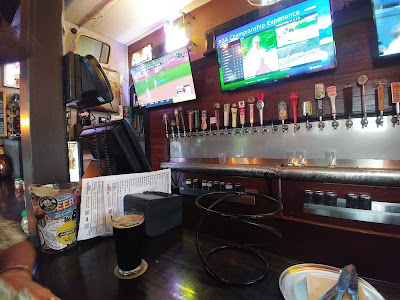 We bopped over to Georgetown soon after to enjoy some lunch at 600 Degrees Pizza.  Sadly, I did not get a pic of the pizza - it was gone in a flash.  It featured sliced meatballs, pepperoni, marinated tomatoes, red onions, and garlic and was fantastic.  Even if we were very hungry - snake slaying is hard work - it was a ridiculously good pizza. 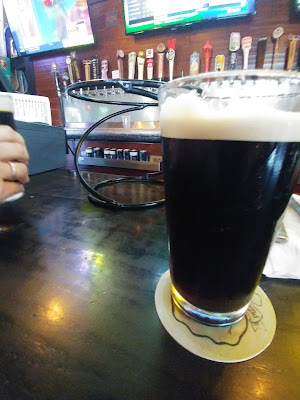 They had a friendly bartender and some nice beer.  But it was a little on the pricey side, so it won't be a regular stop for us.  We went by a winery on the square and decided that wouldn't be a regular stop either - snooty tasting lady pushing the wine club hard and expensive marginal wine.  Pass.  We did stop by Georgetown Winery again, but the experience this time around was pretty lackluster.  I don't know if it was the rain, the snake, or just interactions with multiple unfriendly folks.  We were done for the day. 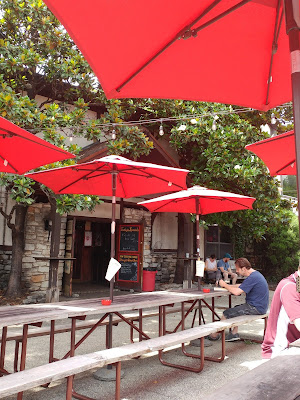 The Girl arrived home Saturday night and we enjoyed the aforementioned dinner which involved Chicken Mole (my favorite thing!), Spanish rice, and steamed carrots.  She will be in Atlanta for a week so we are Ted-sitting.  Since were going to be close to home the next day, we explored a new-to-us draught house that is not new to Austin.  There was a friendly guy out front grilling "for tips only" so we split a fresh grilled brat with sauerkraut.  He says he is out there most Sundays and you can bring something from home for him to throw on the grill.  Delightful! 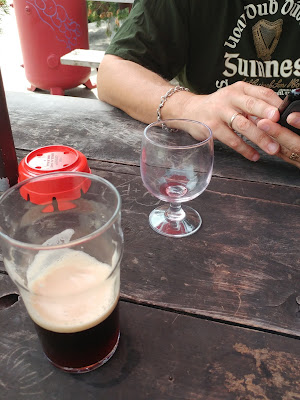 After that, we headed over to Central Market for more snooty people interactions and some salmon patties to grill for dinner.  We hit the hay early - jury duty for me the next day and work for Hubby.  Hopefully, this coming weekend will be more productive - and friendly.  There's the garage clean-out to do and a new release at Save the World.