Have you noticed the price of canned bans has gone waaay up lately?  And it seems like so many family-friendly and frugal meals call for beans.  My family loves them and that's a good thing, but I found that it's always cheaper  to make my own beans in the crock pot and freeze them for later use. 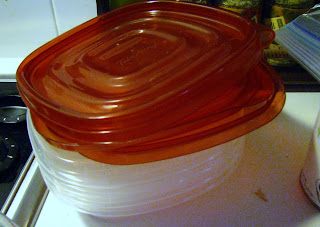 I had a coupon recently for these Rubbermaid containers and they were on sale at Walgreen's.  I love that they are cheap, seal well, and allow you to see what you are storing easily.
Each one held the equivalent of a can of beans. 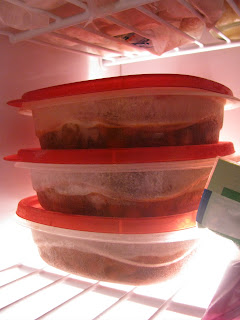 I started off Tuesday by making a 1 pound package of pintos that equaled about 4 cans of cooked beans.  I just put them in the crock, covered with water, and set it on low.  No soaking required. It took about 6 hours or so.  And I left seasoning out so I could use them in recipes.  Four cans worth cost me 98 cents, or a little less than 25 cents each.  Not bad. 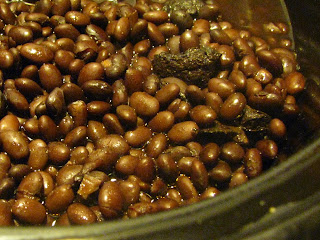 On Wednesday I cooked black beans - 99 cents for a 1 pound bag.  So, as cheap as pintos, but canned black beans are more expensive than canned pintos.  Why is that?  I added a few bits of leftover bbq ribs to season these and used the same cooking method..
Once they had cooled,  into the freezer they went, with the pintos. 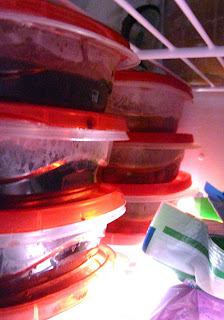 I see Taco Soup in my future.  And Jamaican Rice and Beans,  And Layered Tex Mex Enchiladas.  And all kinds of other yummy things... 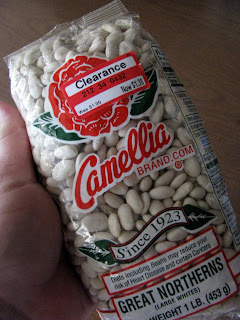 I also bought Great Northern beans from Tarjay, marked down from 1.99.  1.99?  Are you kidding me?  They actually rang up as 98 cents.  This will make an awesome Italian soup.  I have several great recipes that call for cooked white beans so I think I will set up the crock tomorrow before I leave for work.
What about you?  Got any good plans for dried beans this Fall?

Love your idea about crock pot beans and freezing.
I really love more vegetarian fare (beans) and one child who loves vegetarian but wants pizza, pasta, potatoes!
No beans! No one else really cares for beans : (
I am inspired though to consider freezing more meals.