As weekends go, it wasn't bad, just not our usual fun times.  Hubby and I both felt kind of poopy.  Call weekends seem restrictive! 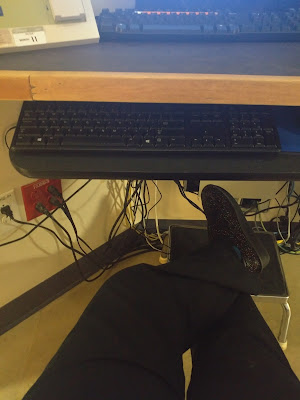 I did get called in on Saturday morning.  Worked 2 1/2 hours, with a little downtime thrown in...
But when I got home around lunchtime I ordered us some take-out and after lunch we worked on the yards.  I finally moved the ficus from its temporary home in the kitchen. 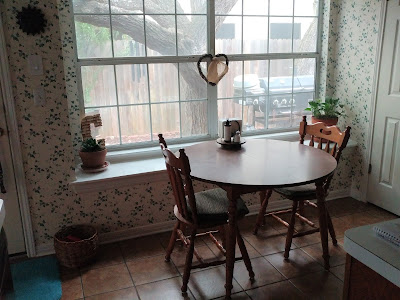 It looks so much bigger in here.  Sweet kitchen table for two with no tree branches on Hubby's head.  {I see we need to find the grill cover and put it back on the BBQ pit} 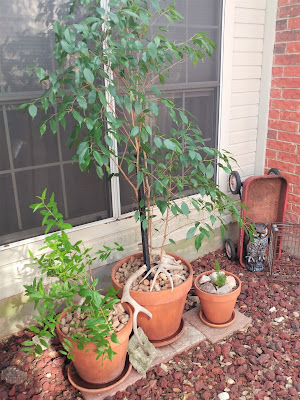 The ficus, olive tree, and a foxtail fern are in the space behind the dining room window.  {This is the infamous "red rocks" area that I have to use the leaf blower on at least once a month.  It is a pain in the rear!} 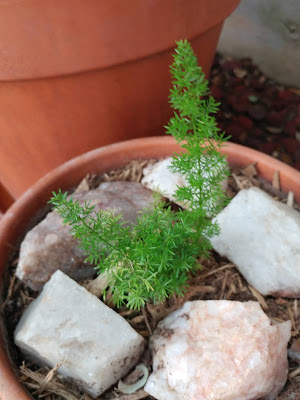 I'm hoping the rocks will discourage the squirrel digging, but I have Mr. Plastic Owl sitting out there, too. 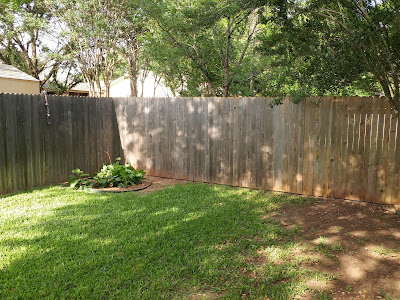 Hubby cut all of the dead branches from the fig so it looks strange now.  But at least it didn't die off completely from the winter storm, so there's that.  He also removed some other branches that were shading the yard a little too much, so now I will just get some sod to help the grass gaps fill in. 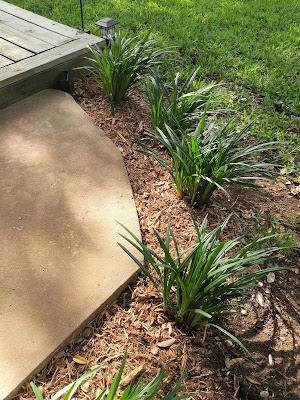 I mulched the fig and lariope.  I had cut them down to about three inches back in March and they came back like gangbusters. 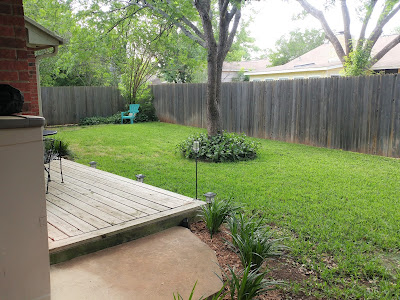 After raking it, pulling weeds, mowing, and weed and feed, we are finally getting some healthy grass back.  I'm so glad we rebuilt that deck!  The backyard is becoming a sweet place to sit.  {Need to get the owl houses installed, too} 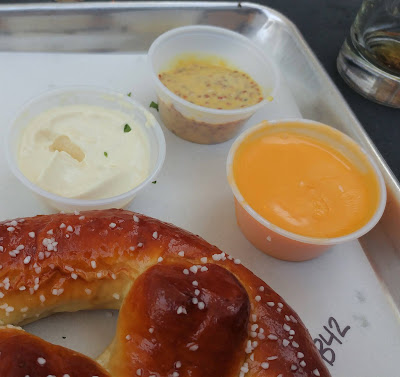 Hubby pooped out, but I worked on the front yard a couple of hours - raking, cleaning out and adding more mulch to my landscape beds, bundling branches for yard waste day...finally I called it DONE and we headed out to get some dinner at a favorite restaurant.  Sadly, they were having oven issues so we had an appetizer of soft baked pretzel instead. 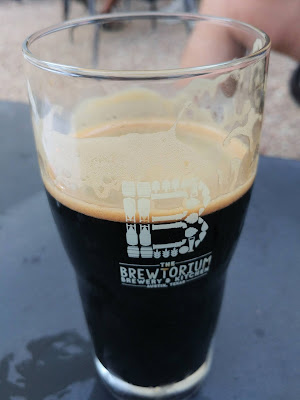 The beer was delightful, too.
We headed to a BBQ place that was just meh. 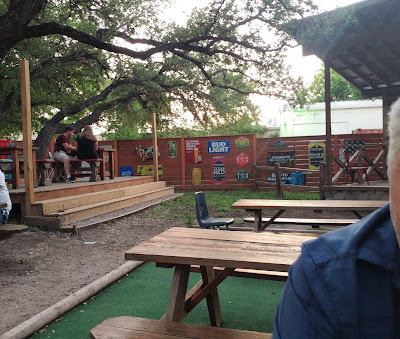 I mean - it wasn't terrible, just nothing to write home about.
For people who live in Austin we are woefully unaware of some of the better places to grab a bit to eat on a random Saturday night!  It was in our old neighborhood so we drove pass the first house we owned.  Trippin' down memory lane... 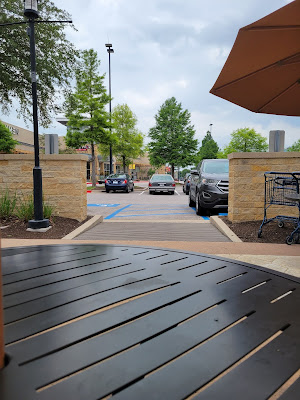 The next day I was just sure I was going to get called in so we stayed close to home and I putseyed.  Around lunchtime we went over to the T-Mobile store to get new phones.  I really HATE the process of getting a new phone.  It is every bit as stressful and expensive and mind-boggling as getting a new laptop.  Hate, hate, hate it.  Hubby's phone took over and hour and a half to go through the process.  I sat outside listening to terrible outdoor mall muzak! 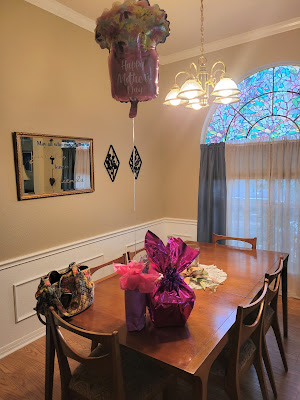 But when we finally got home there were sussies from Firstborn and LA!! 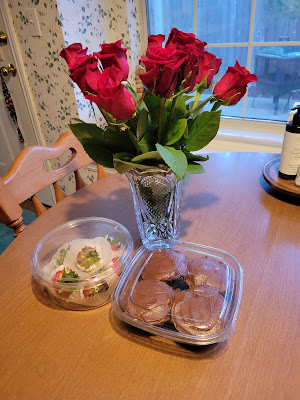 Then a short time later, Bubbie's girlfriend, Delilah, dropped off some home baked goods and roses.  I felt very loved.  All four texted me (no one uses their phone to call...) and although I didn't get to hug their necks (except for Delilah) , you better believe I will next time I see them! 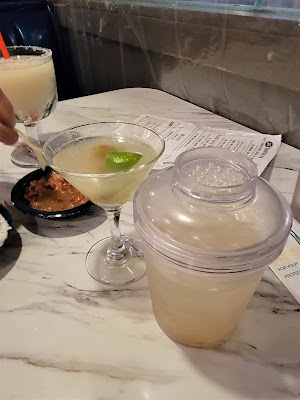 We ended the weekend with Tex-Mex and drinks at Chuy's and it really hit the spot.  I always forget that they have very good food.  It is one of our favorite Austin-based restaurants from our earliest days here.  It was a great end to Mother's Day and call weekend and now that we are in the middle of the week, I am wishing I had my hands around another of those Mexican martinis...
Gina
at 3:00 AM

My weekend was kind of stinky. Just me and the Cardinals. At least they won the game. Your olive tree looks great. I just ordered one this past week. I’ve never grown an olive tree before, so I’m hoping for the best. The variety I got is supposed to yield a good amount of olives, so I can hardly wait!

Can you believe its 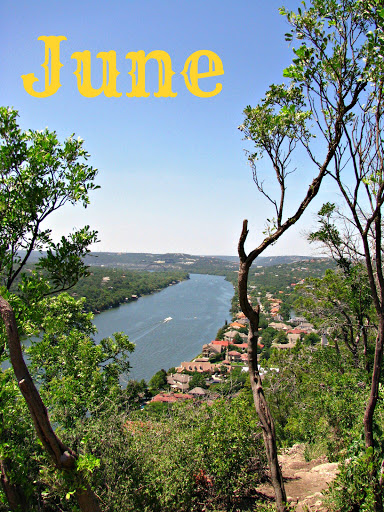 Rustown Mom
We are a family in Austin, Texas. Hubby and I have worked hard to make a home to raise four kids and now they have all pretty much left the nest. I believe that a home filled with love is a blessing for our family whenever we are together, and will strive to make it beautiful for all of us, every day.